The very first soda can to ever hit the market could be an argument waiting to happen. Some will tell you it was Cliquot Club Ginger Ale way back in 1938. Others will speak up in favor of the Dairy Seltz brand; it is unknown whether this soda was actually ever distributed. Yet another possibility could be Coca-colas first attempt. Even if the earliest introduction was in 1938, it didn’t last. The added citric acid did not mesh well with the lining of the cans, leaving them to be pulled from distribution.

Pepsi Cola tried in 1948 to gain a large share of the soda market by introducing the company’s product in a can. This ended just two years later because of leaking and exploding cans. However, the big canning companies refused to surrender the idea, and morphed the cans to withstand the higher pressures from carbonation.

1953 brought Super Root Beer and Super Coola in cone top cans. About the same time, Shasta and Can-A-Pop started putting carbonated sodas in the flat cans we use today. Flat cans were easier to stack and store on retailers’ shelves. It took only two years, for most all the other soft drink manufacturers to jump on the bandwagon with flat cans. Cone top soda cans were entirely gone after 1957.

Interesting enough, Coca-Cola and Pepsi took the longest to switch to flat cans, waiting until the late 50’s.

How do I drink this?

Initially the soda can was factory-sealed and required an opener called a “church key”. The sharp tip would pierce a triangle shape into the can. Then in the 1930’s soda cans (and beer cans) were designed with caps called "cone tops", which tapered in a cone shape to the top of the can. Oil cans took on this form as well, leaving it hard to distinguish oil from soda.

Consumers were not fond of canned soda or beer due to the metallic taste. Ermal Fraze changed everything when he came up with a can-opening method called the “pull-tab” in 1959. The church key was no longer needed as an aluminum pull-ring lever ripped the top of the can into a wedge-shaped opening. Also nicknamed ‘pop-tops’ they became wildly popular into the early 1970s. The problem was with the littering and the risk of choking by these unique little pieces of metal. Pop top art became a fad, as people would use them to string bead curtains and make belts.

1975 saw the end of pull tabs when Daniel F. Cudzik of Reynolds Metals invented “stay-tabs”, the opening on soda cans you see today. 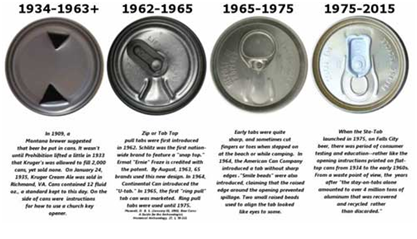 Other interesting facts about the soda

Aluminum is one of the easiest and most cost-effective materials to recycle. Many people collect cans for this purpose, turning empty tossed cans into fast money.

Coca-cola was the brainchild of an ex colonel who was wounded in the civil war. John Pemberton suffered a subsequent morphine addiction and was desperate to break it. Modeled after his friends’ French beverage, coca wine, Pemberton made the famous coke syrup with a coca-leaf extract and kola-nut extract.

That was not all he added, the early Coca-cola also included a hefty dose of cocaine. Coke was originally sold as a patent medicine said to cure many diseases. Pemberton added the carbonated water only because it was ‘good for the health’. 7up contained lithium, a mood-altering drug, all the way up into 1948.

The most popular soda is of course, Coca-cola with Pepsi not too far behind. Mountain Dew takes third honors with a name history referring to moonshine. It is no wonder Coca-cola leads, the famous soft drink company has over 3,500 different soft drinks to choose from. It would take you approximately 9 years to sample them all if you were trying one per day.

When trade embargoes against Nazi Germany separated Coca-Cola Deutschland ingredients to make Coke quickly disappeared. German born Max Keith of Coca-cola developed a soda that could be made with the limited ingredients they had left. The result was “Fanta”, a sly play on the German word “Fantasie”. This popular soda was made with odds and ends of ingredients like beet sugar, orange juice, leftover apple fiber, and even whey byproduct from cheese production. They no longer use this recipe for our beloved Fanta.

Soft Drinks are the number one source of calories for Americans. Even with consumption rates dropping, soda is a must-go-to beverage. You are more apt to get your calories from the can of soda you just quickly bought, then say, a pizza.